Which is better – Saving plans or Reserved Instances(RIs)? 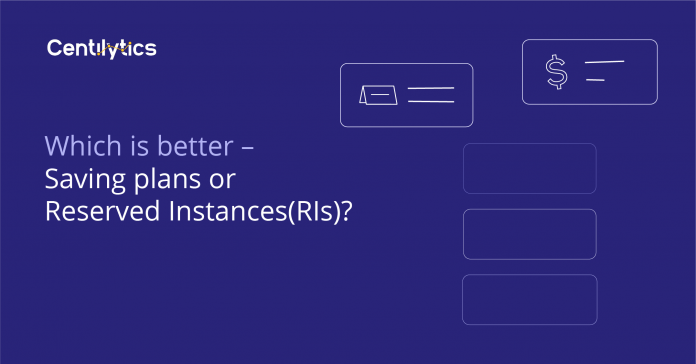 In the latter half of last year, Amazon comes up with a new pricing model called Savings Plan (SP). It offers its users a significant discount on their on-demand Amazon EC2 and Fargate usage over a one or three years period. Ring a bell? If yes, that is because AWS offers another pricing model known as Reserved Instances (RI) that provides massive discounts over your on-demand compute usage too.

However, there are some major differences between SPs and RIs that you should know about. RIs, though extremely useful, had their drawbacks and sometimes could leave customers not saving as much as they initially thought.

The biggest challenges with RIs are needing to continuously monitor their usage and make sure they are always being applied. For example, If you purchased a t2.small RI and later on, a developer upgraded the instance where that RI was being applied; then, the RI become orphaned until a change to the RI itself was made. Without proper governance and automation in place, you are at risk of not breaking even with your investment.

Whereas one of the key features of SP is the coverage is automated. In simple words, you can change your instances as per your need, and the SP will automatically change in the background, offering you self-activating coverage throughout the term.

Another most noticeable change from the RI model is the ability to switch regions. When you book RIs in a particular region, then the benefits of those RIs could only be applied to the region they were purchased. This also increases the risk of orphaning RIs.

The benefit is it is not limited by Region when it comes to SPs. It means, If you spin an instance in North Virginia and move it to Oregon, the SP benefit will persist. At the time of writing, Ningxia and Beijing are not enable regions.

Read Next: Why Does Amazon Honeycode Exist?

As mentioned earlier, you are not limited to take advantage of SPs on Amazon EC2 only because it also provides discounts on Fargate. Fargate is a serverless compute engine for containers. And it is something that is not available with RIs.

How Do Savings Plans Work?

SPs demand spending commitments that allow you to make a long-term dollar per hour commitments to obtain lower rates. For example, if you are running two instances on-demand, you can commit to $9.20 of compute usage an hour, and this commitment will cover all your instances usage an hour to gain the Savings Plan rate. This dollar per hour approach normalizes further so that you can make changes to existing instances without compromising on savings benefit.

If you are exploring SPs, there are only two available options: Compute SPs and EC2 instances SPs, as AWS describes.

Read Next: Is AWS trying to get out of its complex pricing model with “Savings Plans”?

Compute Savings Plans offers the most flexibility and helps you reduce your cost by up to 66% very similar to convertibles RIs. The plans immediately extend to any EC2 instance regardless of region, instance family, operating system, or tenancy, including those as well that are part of EMR, ECS, or EKS clusters, or launched by Fargate. For example, you are allowed to shift from C4 to C5 instances, shift a workload from Europe to Africa, or migrate from EC2 to Fargate, availing from Savings Plan prices along the way, without having to do anything.

EC2 Instance Savings Plans apply to a specific instance family within a region and provide the most substantial discount (like Standard RIs it is up to 72%). Similar to RIs, your savings plan covers the usage of distinct sizes of the same instance type (such as a t2.small or t2.large) across a region. You are allowed to change the OS from Windows to Linux or vice-versa while continuing to benefit, without making any changes to your savings plan.

Should We Stop Buying RIs?

We are not, and you can still find users who aren’t entirely switched from RIs either. Although SPs offer a significant improvement over some major aspects of RIs, there are certain areas where RIs can do today that SPs cannot.

For example, You can sell Standard RIs in the AWS Marketplace (with a fee) if they are no longer in use. Whereas in SPs, you are bound to paying for the Savings Plan throughout the term regardless of actual usage.

On the other hand, convertible RIs enable you to get creative and make exchanges as your usage needs change. For example, users can exchange Convertable RIs during season spikes with three months left on them to increase their coverage during the season. It enables short term savings without making any long-term commitment. This is also something that you can’t achieve via SPs.

We expect users to take a hybrid route to reservations – leveraging SPs benefits for the baseline usage, and RIs where there is a scope of variability.

Read Next: Reserved Instance Planner: Why, When and How to use your RIs?

Are There Any Other Options?

SPs and RIs aren’t meant for everyone. Spot Instances can be a better option based on the workload. For example, Spot instance is best suited for temporary, flexible workloads such as big data and high-performance computing.