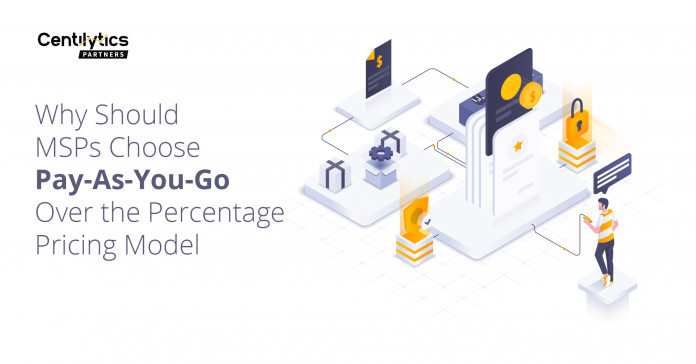 COVID-19 has impacted businesses worldwide, and Managed Services Providers (MSPs) are no exception. In fact, a recent survey by SolarWinds studied 500 MSPs across Europe, North America, Australia, and New Zealand and found the picture to be not so rosy. As per the survey, around 59 percent of the MSPs applied for government relief programs. However, the survey also points at a major heartening trend as over 80 percent of the MSPs are operating at pre-pandemic staffing levels.

The purpose of stating the facts above is not to paint a rosy or grim picture for the MSP industry. Instead, our focus is to help MSPs improve their margins while boosting customer satisfaction. The two desirable feats are what every organization aspires to achieve, and in the case of MSPs, they are within easy reach if MSPs adopt the Pay-As-You-Go (PAYG) model.

Currently, the prevalent trend in the MSP industry is the percentage pricing model. However, the current norm is not always the perfect way of doing things, and one must push the status-quo to reap the rewards. As you read this article, you will realize that the percentage pricing model comes with inherent flaws that not only diminish returns for MSPs, but also set wrong customer expectations.

A fair comparison can be made only when we first know the two pricing models. As is evident from the terminology, the percentage pricing model includes a fixed payment for the duration of the contract between an MSP and a customer. Whereas, in the PAYG model, the customer pays the MSP according to the services used by them. A spike in service usage would incur increased charges, and similarly, a dip in service usage will incur decreased charges. The PAYG model has scalability built in its core.

Before we move ahead and compare the two models based on Efforts and Rewards, let’s establish a few facts. The first is the initial spike in Efforts because when MSPs begin their relationship with a customer, they make sure that they follow industry best practices. The initial adoption of services, ensuring smooth migration, or even establishing a channel for seamless delivery of services requires a massive amount of Effort on the part of MSP. Over the course of an MSP-customer contract, generally, after the customer’s migration is complete, the Effort on the part of MSPs decreases and then goes on to settle at an almost uniform state that is significantly lower than the initial Efforts involved.

Now, let’s see how these facts play out when an MSP chooses Percentage Pricing.

In the Percentage Pricing Model, the burden of hefty tasks at the initial phase of the contract leads to the MSP expending a huge amount of resources in order to ensure customer satisfaction. This often leads to MSPs making significant expenses during the initial phases of a contract, hoping for a return at later stages.

As the contract enters the post-migration phase, the resource expenditure on the MSP’s part comes down drastically. Theoretically, this is the time when the MSP makes up the significant investment it incurred in the initial phases of the contract. However, the statistics involved are far more complex, and often the MSP ends up with razor-thin margins. The post-migration stage also involves customers paying for more than what the MSP is delivering at that point. This leads to a mismatch between customer’s expectations and outcomes, which can potentially be detrimental to customer relations.

This is where the PAYG model steps in with its scalable solutions.

When the contract enters the post-migration phase, the workload comes down for MSPs, and the flexible cost reflects the same. Only this time around, the MSPs do not have to worry about making up for initial investments. Even the customer is delighted as they see the payments reflecting the volume of services they are provided. At this point, it becomes clear why the PAYG is better as compared to Percentage Pricing model.

Lastly, the current pandemic hit world presents a myriad of challenges for MSPs. This is where the PAYG model steps in and provides an avenue of relief for the industry. The PAYG model not only helps in boosting margins for MSPs, but it also ensures business and employee efficiency while maintaining greater transparency with the customers, leading to greater customer satisfaction.